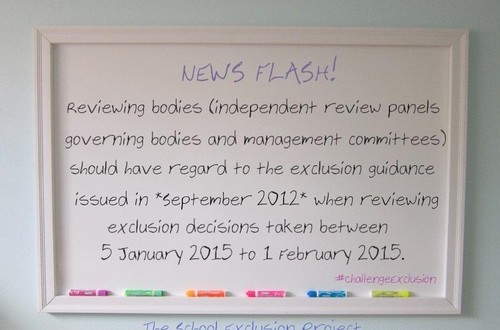 We have received clarification from the Department for Education that the September 2012 exclusion guidance will apply for exclusions that have taken place between 5 January 2015 and 1 February 2015.

This means that all exclusions that took place under the (now defunct) 2015 guidance warrant reconsideration by review panels and governing bodies.

“The School Reform Minister Nick Gibb has removed the current guidance to address some issues with process and we will be issuing updated guidance in due course.

Reviewing bodies (such as governing bodies, independent review panels, management committees, and proprietors) should have regard to the exclusion guidance issued in September 2012 when reviewing exclusion decisions taken between 5 January to 1 February 2015.”

This article was prepared by the author in their personal capacity. The opinions expressed in this article are the author's own and do not reflect the view of, nor are condoned by, the School Exclusion Project, Matrix Chambers, 11KBW, City University or our partners.
Exclusion Guidance, Guidance
Share Post: