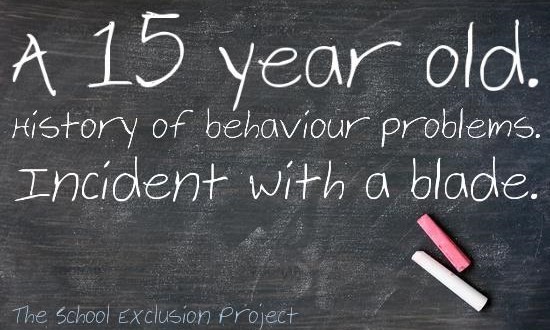 “A 15 year old. History of behaviour problems. An incident with a blade.”

The above tagline would cause most of us to make similar assumptions. I know that when I received this case I expected to hear about an aggressive young offender who brought a knife into school and attacked another pupil. I expected to meet an uncaring family whose son had been neglected and turned rogue. This just shows what scare-mongering, stereotype-enforcing tabloids can do.

My case was about narrative; about how one chooses to tell a story. The school decided to construct an approach based upon assumptions. But our story was somewhat different.

The case was about a boy who had long-term behaviour issues.  His mum had been a constant support to the school (not one of those parents who will defend their children to the hilt!). She was willing to do whatever it took to make things better. She personally arranged weekly anger management sessions for her son and worked closely with a multi-systemic therapist to try to improve her son’s behaviour. No-one could describe her as an uncaring parent.

But her efforts were not succeeding. His behaviour was not getting better and he was doing poorly at school. It is this background of troublesome behaviour that provided the necessary backdrop for a tale that would end in permanent exclusion.

The incident was not as I had expected.

No, it wasn’t a blade brought into school; rather it was a piece of art room equipment that was not properly supervised by teaching staff. It was an incident where teaching staff had repeatedly failed to challenge the behaviour of a student who had a history of problems.

No, it wasn’t some aggressive attack on some innocent victim; rather it was a foolish incident between friends. But the entire episode was taken completely out of context by the school. The story they adopted was that the boy was dangerous and the incident had been an aggressive assault. They even suggested, on the basis of no evidence at all, that the excluded pupil had made others afraid of writing statements (not that their reluctance might simply be that no kid at school wants to be a grass…)

It wasn’t until the Governor’s Board meeting, to review the head teacher’s decision to exclude, that an alternative version was heard. How the victim had told the excluded student that the blade was not sharp and how he had never intended to cause injury. How, exclusion would mean the pupil would be unable to complete his upcoming GCSE exams.

But this was not the story that fitted in with a narrative about a troublesome boy with long-term problems. Although the incident had been so terribly misconstrued, his history told a more compelling tale.

Unfortunately in so many cases of permanent exclusion the school get the story wrong.

The School Exclusion Project gives families the opportunity to re-write their narrative.

This article was prepared by the author in their personal capacity. The opinions expressed in this article are the author's own and do not reflect the view of, nor are condoned by, the School Exclusion Project, Matrix Chambers, 11KBW, City University or our partners.
Case Analysis, Exclusion Analysis, Narrative
Share Post: